Transformed to a dance of electrons along a wire, its ghost lives on. When KEF returns music to its rightful habituation, your ears and mind, they aim to do so in the most natural way they can … without drama, without exaggeration, without artifice".

The company was founded in 1961 by Raymond Cooke OBE (1925–1995) and was initially headquartered in a Nissen Hut on the premises of Kent Engineering & Foundry (from where the name KEF is derived) – a metal-working company on the banks of the River Medway, near Maidstone in Kent. Cooke, an ex-BBC Electrical Engineer, was keen to experiment with new materials and technologies in order to create products with superior acoustic quality that could reproduce recordings as natural as the original performance. From the very beginning, the pioneering inventiveness of KEF loudspeakers was undeniable and now for several decades, audiophiles around the world have revered KEF for its innovative, high-performance loudspeakers.

Packing a formidable array of KEF’s revolutionary wireless technologies, the distinctive and surprisingly compact cast aluminium enclosure of the HTB2SE-W 250W houses a Class-D amp driving a 10in. (250mm) LF driver and a matching passive bass radiator. In addition to experiencing visceral bass punch while retaining the delicacy to convey subtle effects with unerring accuracy, HTB2SE-W gives you all the convenience of wireless operation: no cables to embed or trail across the room, and no complicated set-up. With SmartBass™ functionality, your system will be operational in minutes.

Most important of all, KEF’s advanced signal transmission and processing technologies eliminate unwanted mutes, dropouts or loss of bonding as well as interference from your other electronics. Placed horizontally or vertically, in pride of place or hidden away, all you hear is what the artist intended. 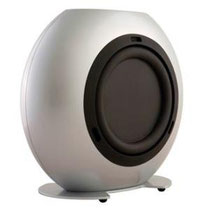