Knives and blades are among the first tools imagined. Originally made of flint, obsidian, bone and ivory, and later of copper, bronze, iron and steel, they have forged human history, adding functional and aesthetic value to everyday lives. Tarrerias-Bonjean has been at cutting edge for five generations, and probably much longer – the parish records of Thiers mention a “coustelier” (cutlery maker) named “Tarerias” back in 1648.

Today, Tarrerias-Bonjean is not just France’s leading knives manufacturer. We also conquer challenges by identifying real needs and finding ground-breaking solutions. We do not create products for sheer pleasure. Aesthetic appeal must be allied with

functionality and performance. Our wish is to conceive objects that are handed down between generations; to develop cutting tools of extreme durability by fusing technological prowess, boldness and simplicity. Our company describes this as the pleasure of mastering perfection. Endowed with everchanging expertise, we are the artisans of the future, pleased to make a major contribution to the evolution of the knife – that noble yet common utensil – through EVERCUT® technology. Sharpness beyond time.

The EVERCUT knife, based on the technology of the same name, marks a revolution in the steel-blade segment – in cutlery but also more widely, in the market of industrial cutting tools and objects. This technological prowess is achieved by a state-of the-art laser beam (instant temperature: above 4,000°C) fusing an ultra-hard material, titanium carbide, onto the edge of a steel blade. This novel process, protected by numerous international patents, for the first time combines steel’s strength and flexibility with an extremely hard cutting-edge. This revolutionary technology is a milestone in 21st-century cutlery, and today positions EVERCUT as the world’s best blade.

The process, further enhanced by ultra-precise machining, offers cutting quality, robustness and finesse to satisfy users’ most stringent requirements, while ensuring an unmatched lifespan. With EVERCUT, blades are virtually wear-proof.

cutting standard BS EN ISO 8442-5:2005. This series of tests made it possible to compareEVERCUT with 450 knives representing all models on the market across all distribution channels, and tested by the same laboratory.

To measure cutting-edge lifespan, the test protocol involves placing the blade on an oscillating media (moving back and forth) on a standardised machine. In each cycle, it cuts a quantity of the media loaded with 5% quartz (highly abrasive), until the knife is completely dulled. This test measures cutting edge retention (CER), the knife’s ability to resist wear throughout its life.

Whereas EVERCUT still cuts after more than 6,600 cycles, the best steel blades on the market do not exceed 35 cycles (and average 17), and the best ceramic blades rarely exceed 2,000 cycles. 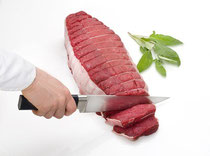 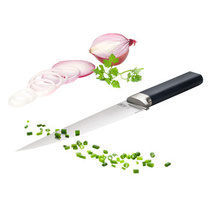 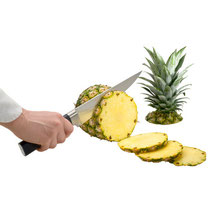 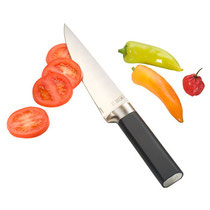 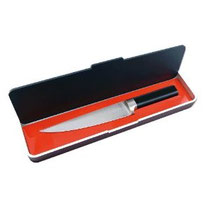 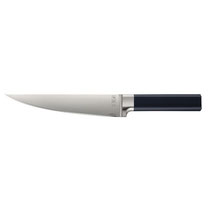 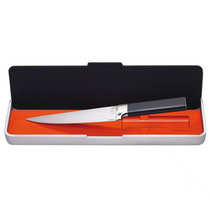 "I have ceramic knives, bread knives, meat knives, you name it, I have it ! But this is something else... The case is elegant, the knife beautiful …. and it cuts perfectly"
"I have never had such a knife so I can’t really compare, all I can say is try it with a slice of tomato on a roll fresh out of the oven and be amazed"
"Evercut is simple, beautiful, and guaranteed 25 years; it’s a beautiful gift for cooking afficionados or those who appreciate perfect tools"